Creepiness is not only for Halloween. Fright seekers can find spooky places in London all year round and we have 5 to get you started.

Highgate Cemetery opened in 1839 and is now a Grade I listed Park of historic interest and importance. It is famed not only for outstanding funerary architecture and astonishing statuary but also the many well known names now at rest there – Karl. Marx Douglas Adams, Patrick Caulfield and Malcom McLaren to name a few. For the most part it is a romantic space for peaceful  contemplation.  But as our days grow shorter, the gloomy wintery light, rambling vegetation and decaying tombstones enhance the ghostly legends and Victorian Gothic spookiness of it all. 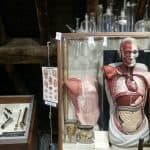 The Old Operating Theatre Museum was created in 1822 before the introduction of anaesthetics and antiseptics.  It is the oldest operating theatre to survive in Europe and has been carefully conserved.  It is an intimate space, approached up a narrow winding staircase into the garret of St Thomas’ Church.  The adjoining museum space is where the creepy really steps up with exhibits of ancient surgical instruments, body parts in bottles – the usual anatomical gruesomeness of it all.  The operating theatre is also a venue for hire.   Yes, you heard right – canapés and fizz can be oganised for an event amidst the gore and ghosts of patients long dead on the operating table.

The Victor Wynd Museum of Curiosities 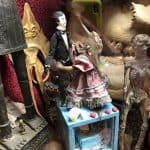 The Victor Wynd Museum of Curiosities showcases lots of creepy dead stuff.  From shrunken heads to Dodo bones the collection is whimsical, bizarre and gruesome.  Some of the extensive collection of taxidermy can be bought or commissioned. Linger longer at the cocktail bar serving Absinthe or hire the venue for your own private revelry.  Surreal art exhibitions and events are also scheduled throughout the year.  The museum is deliberately subversive and celebrates the 19th Century vogue for collecting and displaying anything that took your fancy – the more macabre the better.  It is grotesque and scary, fantastic and funny and seriously worth the shiver. 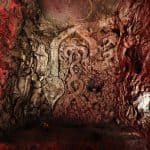 Creepy caves, dark narrow tunnels and gloomy ponds. It’s the stuff of Gollum and Harry Potter, smugglers and murderers. The Chislehurst Caves are actually 35 km’s of subterranean, man made chalk mines, dating back to at least the 13th century. Guided tours are conducted in the dark, by lamp light and are atmospheric and entertaining. The question is – would you stay overnight, on your own? 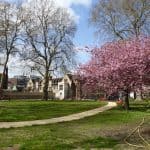 Did you know there are Plague Pits, which are essentially mass graves for plague victims, dotted all over London.  Many are now elegant and peaceful garden squares or notable public parks, such as Green Park in central London.  None of them give any indication of the thousands of people buried only a few meters below, and who would have died a miserable and gruesome death. Charterhouse Square is the largest where an estimated 50 000 people have been buried since 1348, some of them still alive when they were disposed of.  Little wonder there are innumerable tales of mysterious moans, groans and shrieks on dark London nights.